My name is Colleen, after being diagnosed 4 years ago with PCOS, I am now pregnant with our first baby thanks to OvuSense!

Here is my fertility journey:

In 2011 I had a cyst rupture and was diagnosed with PCOS. I was on birth control at the time, so they could not verify this with blood tests, but based on my menstrual cycle history and numerous small cysts the doctor thought it was likely. I was told that the treatment for PCOS was birth control, which I was already on, so to keep taking it, but that when I wanted to have children I may have some difficulty.

Fast forward three years, my husband and I were ready to expand our family. I went to my new GYN/OB, as we had recently moved, told her about the suspected PCOS and she did bloodwork to confirm; I did have PCOS. She gave me a prescription for Clomid and Provera, to bring on my period, and sent me on my way. No discussion of other treatment, follow up, alternative methods, etc. I wasn’t satisfied with this and began to do my own research.

I learned about ovulation predictor kits (OPKs) and basal body temperature (BBT), but didn’t have any luck. OPKs didn’t work for me and BBT didn’t fit well into my lifestyle with different wake-up times for work. There had to be another way to confirm ovulation and that is when I stumbled across the OvuSense Fertility Monitor!

I purchased OvuSense and started tracking cycles and, also, continued on with my research feeling in my gut there was more that I could do to improve my chances of conception. I found www.pcosdietsupport.com which promotes a low glycemic load diet removing gluten, dairy, and soy to manage hormones, as well as scheduled my first acupuncture session. I also began to take Ovasitol to manage insulin and promotes menstrual regularity and normal ovarian function.

Month one of OvuSense and my new diet routine was exciting, but nerve wracking. I never knew what each morning’s reading would bring, but I was hopeful. Month two more of the same, although this time I got an ovulation prediction, which was even more exciting, but my period still came. Month three was more of the same, although my period was arriving on it’s own. I appreciated knowing what was truly happening in my body, but it was still frustrating. I tried to hold on to the fact that I was ovulating, that my cycle was now regularly arriving without medications to bring it on, and I was loosing weight, but some days that was easier said than done. I appreciated the support of the OvuSense Facebook group during this time (PCOS Fertility Support) but I am not one to just let things happen and, by month four, I began to talk to others to find out additional things I could do.

I spoke with fertility nurse, Kate Davies, who is the nurse consultant for OvuSense. Support from Kate comes free with OvuSense so I was very happy to speak with her and get advice and have her look at my OvuSense charts. Kate was very supportive, encouraging, and provided a couple of suggestions we could do to tweak with my husband’s lifestyle. Up to this point, I had been the one making the majority of the changes.

Around this time, I also scheduled an initial consult with a fertility specialist. I had more extensive blood work done and an HSG performed. My insurance (USA) would only cover diagnostics for infertility until August, at which point there would be some coverage for treatment, so we planned to have our first round of IUI in August.

And then it happened… what I thought was a positive pregnancy test. I wasn’t sure and didn’t want to disappoint my husband if I was wrong since I was only 12dpo (days post ovulation), so I took a photo and posted it to the OvuSense Facebook group where folks confirmed it was a positive test!! 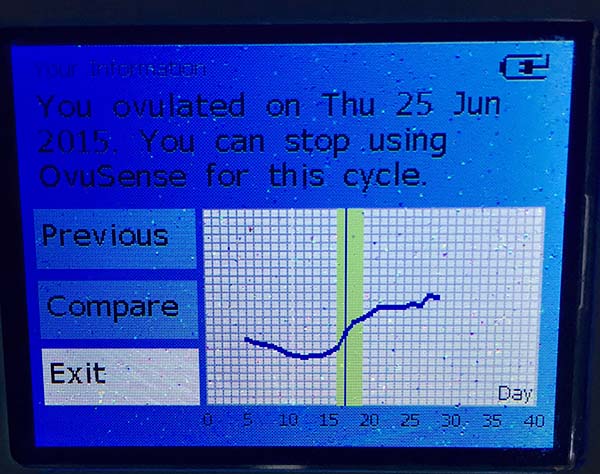 I sent an email to my contact at the fertility clinic with the same photo and she had me schedule a blood test. It is funny, in all the planning and research I did to get pregnant, I never really thought about how I’d tell my husband; I hadn’t wanted to jinx it. I ended up stopping at a store and picked up a toddler shirt that said “The Best is Yet To Come” and showed it to him before we went out for our weekly date night!

My husband was shocked and it took him a few minutes to process the news. He then shared that he had been having reoccurring dreams the last couple of weeks of us having triplets! No, we aren’t having triplets :) 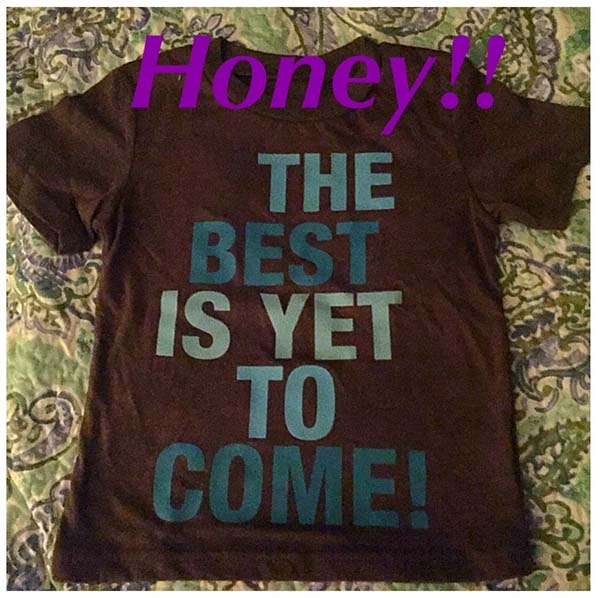 We are due with our baby girl in March! It has been a long road to get here, and continues to be through this pregnancy, but I feel so blessed not to have just taken my doctor’s advice and pushed on to find these other resources.

Our very next cycle was going to be IUI, so I strongly believe we were able to avoid this thanks to OvuSense and PCOS Diet Support.  I even continued to use the OvuSense monitor after the pregnancy was confirmed to track my progesterone levels, in the hopes of spotting an early miscarriage if my levels were to drop. For me, OvuSense was definitely something worth saving up for!

Best wishes and love and luck to you.