I'm Fiona.  I was diagnosed with PCOS and struggled for 2 years to conceive.  Thanks to OvuSense, I'm now pregnant!

When I was 15 years old, I was diagnosed with PCOS after absent periods for over a year.  I was put on Metformin;  I suppose that I didn't realize the struggles I would face later on in my life when I wanted to have a child.

I met my now Husband in 2010. I  was upfront with him from day one that I may have trouble conceiving but that didn't bother him in the slightest; he said he would do whatever it takes when the time came for us to start trying for a baby!  Well, that time came soon after we got engaged in 2013.  After many months of unsuccessful attempts, we decided to wait till after our wedding in September 2014 to go see the doctor and see what they were able to do for us. I was 27 and my husband 30.

We (mainly me!) spent the next few months going for different tests to check what may be the issue. All tests came back clear except the cysts on my ovaries.

In January 2015, a lovely friend of mine told me about OvuSense (I had used Clearblue ovulation sticks for about 6 months unsuccessfully before realising they don't always work well with ladies who have PCOS!). I spent hours reading through the OvuSense website with my husband and discussing the money. We decided we would try OvuSense with the 4 monthly payment plan, which worked out great for us!

The day my Ovusense Monitor arrived it felt like Christmas. I couldn't wait to get started using it. I was a bit nervous at first, so I was joined the PCOS Fertility Support Group on Facebook.  Once joining, I had so many lovely people advise me about how they have also had the OvuSense monitor and how they were getting on with it.  It was a fantastic source of information and support for me.

Six cycles passed, and no ovulation confirmation on my monitor. I was a little upset, I'm not going to lie, but at least I knew then I could tell the doctor my findings. I just wish my Fertility Doctor was a bit more knowledgeable about the OvuSense, as she told me it was nonsense and I should just 'wait and see what happens'.  I think I would have been more stressed if I had to guess what my body was doing if I didn't have the OvuSense to know for sure!

I saw my fertility doctor in July 2015. She prescribed Clomid for me and I took this on days 2-5.  I then had a scan on day 11 to see if I had any follicles, and bloods taken on day 21 to see if ovulation was a success.   I used the OvuSense alongside the treatment to remind me what cycle day I was on.   Round 1 of treatment was not successful according to my blood results on day 21, so we gave up monitoring and 'baby danced' that month instead.

At the same time, started Reflexology on a weekly basis, I wasn't too sure what to expect, but the main thing it did was relax me.

Onto round 2 of my treatment in September 2015.  My doctor said I didn't need a scan, just bloods on day 21. This time my Ovusense hadn't told me I had ovulated yet, but the lines on the graph were increasing daily so I knew something must have been working! 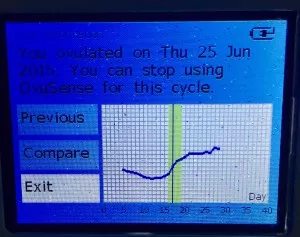 Gutted by the blood results, my doctor prescribed me with Tamoxafen which would be taken in the same way. I paid for the prescription and was to wait for my new cycle to start before taking it. This wasn't the case! On the 6th October, I had my first ever positive pregnancy test!!  I had only ever dreamed of this day after years of disappointment. 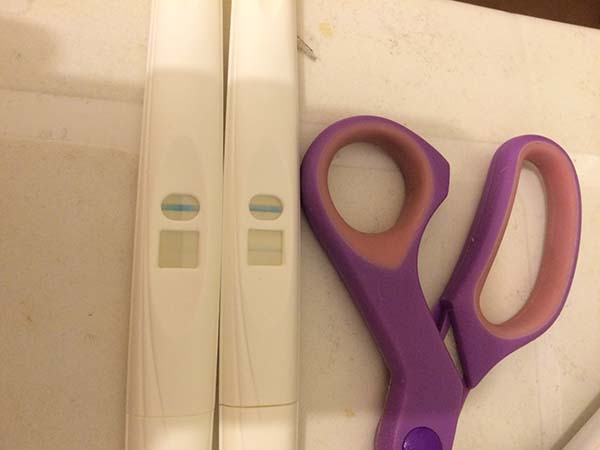 I was so excited and ran and told my husband right away. I wished I had waited and surprised him in a way I have previously seen on the internet before, but I was in too much shock!

After an early scan at 6 weeks to check it wasn't twins (due to the Clomid) we found out our due date for 'Baby Bean' is estimated for 19th June 2016, Father's Day in the UK. We couldn't have 'timed' it better!

I was very open about our journey of issues with trying to conceive.  Along the way, I have made a lot of new friends in the same position and have also helped lots of lovely people along the way too.

I would recommend OvuSense to anyone who is tracking each month, it really takes the guess work out!  My husband said I was less stressed and he enjoyed looking at the graph each cycle with me.  I am looking forward to using OvuSense next year after our baby arrives, not to make number baby number 2 straight away, but to see how the pregnancy has changed my body and see if will ovulate on my own.

Best wishes and best of luck to everyone trying to conceive.  My advice is to take control of your fertility and know for sure when ovulation occurs for you so that you don't waste time.

If you are already an OvuSense user, join our closed support group called 'OvuSense Users Group' on Facebook here.