Follow Your Intuition: How Trusting Her Data Helped Lead to One Woman’s First Pregnancy 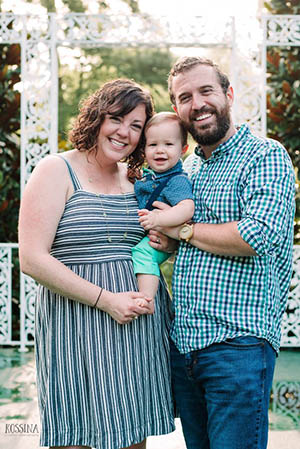 When Sarah was diagnosed with polycystic ovarian syndrome (PCOS) at 23, she didn’t think much of it immediately. She was told that it might cause her some difficulty when she wanted to get pregnant, but at the time she wasn’t engaged to her then boyfriend (now husband) so trying to conceive was far from her mind. After getting married and talking with her husband, Rob, about beginning their family at 27, she spoke with a friend who encouraged her to talk with a reproductive endocrinologist right away.

Taking her friend’s advice, she connected with a local Orlando reproductive endocrinologist to learn more about what getting pregnant would entail. Because she had a mild case of PCOS, she was put on supplements and letrozole, a common fertility medication for women with PCOS. Sarah also began undergoing intrauterine insemination (IUI), a fertility treatment that involves placing sperm inside a woman's uterus to facilitate fertilization with the goal of increasing the number of sperm that reach the fallopian tubes and subsequently increase the chance of fertilization.

The IUI process was time consuming and required her to visit her doctor monthly to see if she had any viable follicles to be able to undergo the procedure. In conjunction with the IUIs, she tried to use different fertility apps to track her cycle but quickly discovered they weren’t able to take into account her PCOS.

Dealing with the Emotional Strain

As time went on, Sarah began feeling very isolated. Some of her family members told her that she shouldn’t worry about having PCOS because other relatives were very fertile. She began seeing more and more of her friends easily getting pregnant on their first try. Sarah felt like she didn’t have anyone to share her feelings and fears with.

Perhaps most frustrating to her was that people she barely knew began probing her with questions about why she and her husband had not yet had a child. She began telling them that they would have kids “when the time was right,” but as the emotional toll increased, she felt she needed to change her answer to more accurately show how she felt.

Instead Sarah began telling inquirers, “Actually, we’re trying and it’s not going well.” She discovered the people who were asking for their own curiosity, didn’t continue the conversation but those who genuinely cared about what was happening in her life were more compassionate and understanding.

“When I shifted how I responded to these probing questions, others began to open up about their own experiences with infertility or shared stories about others’ struggles,” said Sarah. “The more I was able to voice what was going on with my fertility, the more I found people who were willing to talk with me about it and give me the outlet I needed apart from the online communities I was apart of.”

Taking Her Fertility into Her Own Hands

After a year of trying to conceive through seven IUIs, her doctor told her that it might be time to consider in vitro fertilization (IVF). Sarah decided that before she began undergoing the more invasive, costly, and time consuming process of IVF, she wanted to explore other options. She and Rob had been considering OvuSense for awhile and this news solidified their decision to try the product.

During her eighth IUI and after a month of using OvuSense, Sarah discovered she had been ovulating about 12 hours before she even used the HCG trigger shot that was supposed to stimulate ovulation. She shared this information with her doctor but was told to continue the IUI process as she had with the previous seven cycles. Trusting the sensor and app, the next month before her scheduled IUI, she decided to administer the HCG shot before she ovulated to maximize its effects – after her ninth IUI, she was thrilled to learn that she was pregnant at 32.

Getting Her Happy Ending

After successfully carrying her pregnancy to term, Sarah’s son was born in August 2017. Given it was such a long process to get pregnant, Sarah wishes she had learned more about her cycle earlier in the process.

Sarah’s advice to other women struggling with infertility is to “surround yourself with people that are going to be compassionate with what you’re going through -- sometimes you just need someone to say ‘I hear you, and I understand this is hard, and I’m sorry.’” Furthermore she shared that sometimes the people you’re closest with need more education on what you’re going through and why it’s impactful. In Sarah's case, many of her own family members didn't understand how big of an impact PCOS had on her ability to get pregnant and once they understood these challenges they were much more understanding and able to support her more effectively.