Helen began using OvuSense in December 2017. Shortly after, she split with her partner and decided to move ahead with donor sperm to try and conceive. Throughout her fertility treatments, Helen used OvuSense to give her a feeling of control. She recently shared her story with our OvuSense Users Group community on Facebook. 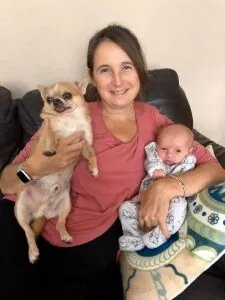 Congratulations on your OvuSense baby, Helen, and thank you for sharing your story with us and others who are struggling to conceive.

Read more from Helen below...

I am over the moon to announce the arrival of my OvuSense baby, Ada Grace. She joined us on 7th October 2019, weighing 5lb 13oz.

My OvuSense journey originally began in December 2017, after trying to conceive for around 2 years with my (now ex) fiancé. I was taking Inofolic sachets for PCOS, vitamin D and iron as recommended by my doctor as both levels were low, but all other tests had come back clear. My partner had 2% normal sperm.

In May 2018, following a split with my partner, I made the decision to go ahead on my own with donor sperm. I had turned 40 that month, and after many years of trying to find a lifelong partner to settle down with, there was a tough period of realigning my ideas of the perfect family.

Using a sperm donor had always seemed like something other people do; not me. But, now I have the beautiful Ada in my arms, I can't believe I ever doubted my decision.

I continued to use OvuSense during my fertility treatment, and found that it gave me a feeling of control throughout the process even though I was in the hands of the clinic. At the start of the treatment, the clinic dismissed my charts as a gimmick, but as time went on they were referring to my charts, and it made it easier to plan and predict my visits to the clinic.

I underwent one failed medicated IUI, 1 egg collection followed by a fresh cycle of IVF that ended in a miscarriage, and 1 unmedicated frozen cycle where we put back 2 embryos, resulting in my beautiful little Ada.

I would like to thank OvuSense and the users of this group for supporting me in achieving my dream. Ada is now 2 weeks old and I still find it hard to believe she is real after many years of longing for her.

I will remain a member of this group as reading success stories has always been uplifting for me, and I hope my story will uplift others on days when their journey seems too complicated to comprehend♥️.