My name is Jenny and here is my fertility story. I am 27 years old and I have PCOS. I am married, with one daughter, and I just found out that I am pregnant with my second after using OvuSense realtime fertility monitor for just one cycle. Recently, I purchased OvuSense to know for definite if I was ovulating, or not. I used OvuSense each day for one cycle and it was great to see the messages each morning. It filled me with hope and confidence that my body was working in the way that it should.

I got diagnosed with PCOS 7 years ago. Doctors told me at the time that I wouldn't conceive naturally; it left me heart-broken for few years. Eventually, I got my round the fact that I wouldn't have children naturally, so decided to follow my dream and join the Army. During this time, I changed my diet and exercised every day. I managed to pass my tests for the Armed forces and, 2 weeks before I was due to go into the service, I found out I was pregnant with my daughter! She is now 3 years old. 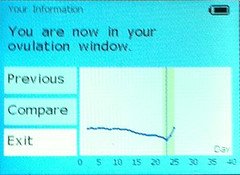 My husband and I have been trying again to conceive this year and it has been10 months now of trying without success. I still keep to healthy diet of fresh fruit and veg, and I also do pole fitness; it's fantastic for working all your muscles! My periods have regulated and are now every 6-7 weeks as a result. After a few weeks of using OvuSense, I got this message: It made me sooooo happy! I smiled all day when I got this message. 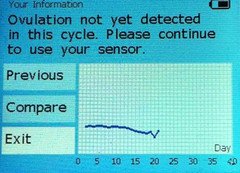 Then I received this message and I wasn’t sure if I had actually ovulated, or not: Obviously, I was upset. I had a little cry and sent Laura and Lucinda from OvuSense a private message with this chart on OvuSense Facebook asking for help. It was such an emotional rollercoaster and I was a bit upset that I might not have ovulated at all. Laura and Lucinda said to just carry on using OvuSense and hopefully it will ‘confirm’ ovulation. They said that sometimes this happens, every cycle is different and what OvuSense is doing is ‘detecting’ and charting temperature changes and predicting ovulation for you. Laura and Lucinda said to carry on and see if OvuSense will confirm the exact date ovulation for me so that I knew for sure that I actually did ovulate, so that’s what I did. I cannot say enough about the team at OvuSense (Laura and Lucinda). It was so nice so to know that there are people out there who care what I was going through. Laura and Lucinda were literally there every morning for me, answering questions about my charts for OvuSense; they were both so patient and supportive. Each time I would send them a private message (with a picture of what I was seeing on my OvuSense) and they were straight back with advice and support, even on the weekends. They really helped me through the whole process.

Then, a few days later, OvuSense detected my ovulation temperature rise again and confirmed that I had actually ovulated! Thankfully my temperature continued to rise and OvuSense told me that I was in my ovulation window. Based on this knowledge, my husband and I ‘took action’ (had sex) and tried to conceive that very weekend! OvuSense gave me peace of mind, which was all I needed. I had a massive smile on my face for 2 days! I had not felt that relaxed in a long time. A few days later, I then got this message from my OvuSense which was just the best news: OvuSense confirmed my exact ovulation date. I was amazed how late it was in my cycle! I had no idea how late I ovulated and I would have never guessed on my own. With PCOS, I knew that I might not ovulate every month, but at least I knew that I had this month. I never would have of have known that, or ‘when’ it was, if I didn't have OvuSense! 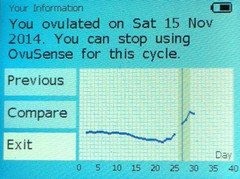 I just cannot say enough about the support from the OvuSense team I received. It was honestly better than my doctor’s support. My doctor had not told me half the information about my cycles that OvuSense and the team had; he just told me to book in for blood tests when I thought I was going to ovulate that cycle. Of course, I did tell him that I did not know when I was ovulating, if I was at all! How could I possibly book in with my doctor on the correct date? LOL The next thing that happened was a week or so went by and I had not started bleeding yet. I thought, ‘why not’ and I took a pregnancy test and it showed this... I'm pregnant!! Here is my positive pregnancy test: I told Laura and Lucinda right away in a private message via the OvuSense Facebook, and they were really happy for me and urged me to go to my doctor and get it confirmed. Good news, I had the doctors results back a few days later and they have confirmed that I’m positive for pregnancy! Still doesn't feel that real! LOL. 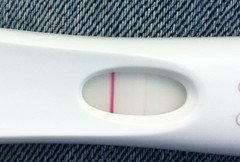