Testimonial: One Woman Learns the Value of Her Ovulation Date With OvuSense

Every day, we're blessed to hear stories of how OvuSense is helping women by empowering them with more information about their fertility and bodies. Read on for a recent user's experience that was shared through our Instagram page! Have your own experience to share? Contact us! 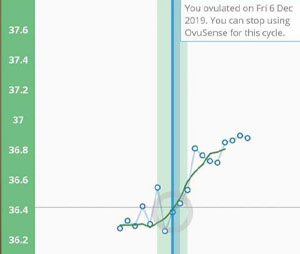 I'm 30 years old, have hypothyroidism and PCOS. I had a uterine polyp surgically removed in February 2019 that left a scar in my uterus and they suspect I have a bent left tube. My HSG showed open tubes though and my hubs had a normal SA. I took 5 rounds of clomid where OvuSense said I ovulated each time and my doctor believes I only ovulated twice. I also took 1 round of femara where I did not ovulate per OvuSense or doctor. My doctor would not listen to me saying that I ovulated later than CD 14. I only knew I ovulated around CD 18 because of OvuSense.

During my last doctor's appointment on December 2, my doctor told me she thought I have endometriosis because I'm not ovulating. But I was! She told me she wanted to do a laparoscopy in the next week or so to explore and see if I did in fact have it. I declined the surgery for the time being and told her that I wanted to think about it. Since my doctor had suspected the endo, she didn't give me fertility drugs for this cycle. But we tried anyway.

OvuSense said I ovulated on December 6th and I got my first BFP ever 10 days later. Not only that, but my doctor called me yesterday to tell me that I did ovulate this cycle but I could do better and we should have the surgery.

You know your body ladies! Doctors can only tell you so much, so don't let them discourage you. My mom was also told she would never have kids and she had 4 healthy babies. You just never know.

Prayers and baby dust to all you ladies!"