Progesterone and Temperature: Facts and Misconceptions

Progesterone is often misunderstood by medical professionals. While it is thought that progesterone rises after ovulation, we have seen through our clinical trials that it rises during ovulation. OvuSense is the only clinical ovulation monitor on the market that accurately tracks the rise and fall of progesterone in the body through continuous measurement of Core Body Temperature overnight in the vagina. 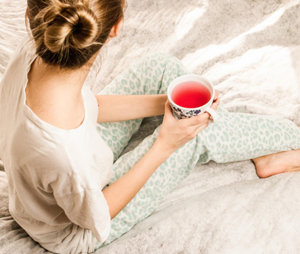 There is so much information available on fertility and the science of getting pregnant, including various vitamins, foods, and treatments that women are encouraged to try which may or may not help them get pregnant. One of the most important factors in getting pregnant and sustaining a healthy pregnancy is the relative level of progesterone throughout the reproductive cycle. Monitoring how your Core Body Temperature (CBT) rises with ovulation and fluctuates throughout the cycle is the key function of OvuSense.

Progesterone and CBT are linked because there is a ‘thermogenic’ reaction when progesterone is released, causing your temperature to rise. The relative temperature before and after ovulation tells you and your doctor if you are ovulating and whether your cycles are progressing as expected, either with or without treatment.

Before we explore how progesterone impacts your fertility, let’s take a step back and review why this hormone is so important if you’re trying to conceive.

So What is Progesterone?

Progesterone is a steroid and sex hormone, and its relative level in the body is critical to menstruation, fertility, and sustaining a pregnancy. As well as the natural release of progesterone as a result of ovulation, it can also be prescribed by doctors for hormone supplementation to boost your progesterone levels, and it is commonly used in conjunction with fertility treatments such as IUI or IVF.

Not only does progesterone help to regulate the cycle, but it also impacts a woman’s fertility by preparing the uterus for pregnancy, triggering the uterine lining to thicken and ultimately accept and support a fertilized egg. This means that adequate progesterone levels are not only critical to getting pregnant but also staying pregnant following implantation.

We expect progesterone levels to start out low at the beginning of your cycle, increase around ovulation and stay high after ovulation before your next period begins.  Some of the most common causes of progesterone fluctuations which don’t follow this pattern include conditions such as polycystic ovary syndrome (PCOS), hypothyroidism, chronic stress, or obesity  — and these unexpected fluctuations result in signs or symptoms such as irregular periods, infertility, and miscarriage.

The Connection Between Temperature & Progesterone

Here is how progesterone corresponds with your body’s temperature, ovulation and cycle patterns. During the follicular phase, which begins on the first day of your period and ends when you ovulate, most women experience naturally low progesterone levels — resulting in generally lower temperature readings. Keep in mind, the length of this phase and average temperature range can vary not only woman to woman, but also cycle to cycle.

Progesterone is released at the point when ovulation occurs – which is when a follicle in the ovary ruptures, an egg is released into the fallopian tube, and the ‘corpus luteum’ forms from the collapsed follicle. The release of progesterone causes a corresponding rise in a woman’s core body temperature. This marks the beginning of the luteal phase, during which the egg is either fertilized and an embryo forms or the egg is not fertilized and the next period begins.

This relationship between temperature and progesterone has not only been known about for decades, but reaffirmed by continuous research since — laying the foundation for the rules by which temperature can be used to work out when ovulation has occurred. The most commonly used is known as the “three over six” rule.  This rule tells us that ovulation has occurred if there is a sustained rise in temperature over 3 consecutive days which is at least 0.3 degrees Celsius (0.54 degrees Fahrenheit) higher than the previous 6 consecutive days.

The Connection Between Temperature & Progesterone

Here is how progesterone corresponds with your body’s temperature, ovulation and cycle patterns. During the follicular phase, which begins on the first day of your period and ends when you ovulate, most women experience naturally low progesterone levels — resulting in generally lower temperature readings. Keep in mind, the length of this phase and average temperature range can vary not only woman to woman, but also cycle to cycle.

It is important to note that progesterone starts to be released at the point at which ovulation occurs - when the dominant follicle ruptures in the ovary, an egg is released into the fallopian tube and the corpus luteum forms from the collapsed follicle.

Bonus Fact: Did you know that the corpus luteum rapidly forms to become a dynamic endocrine gland and reaches 2-5cm in diameter?

The very first pulses of progesterone cause an immediate corresponding rise in core body temperature. This is when OvuSense’s unique algorithm comes into play. Our patented ‘CBT technology’ intelligently analyzes your daily data to convey the true representation of progesterone production in your body. As soon as our algorithm detects that your core body temperature is starting to rise in a particular way, we are able to predict the onset of the 24-hour ovulatory phase - when it is possible to get pregnant. OvuSense has been shown in clinical studies and ongoing international research to be able to predict ovulation using current cycle data with 96% accuracy and confirm ovulation with 99% clinical accuracy.

Once the ovulation phase is over, the luteal phase officially begins and this is when your temperatures should remain elevated. If your egg was not fertilized, your next period should begin in the next 10-16 days, depending on the length of your luteal phase. If your egg was fertilized, the embryo will eventually make its way down the fallopian tube to implant as a developing blastocyst in the uterine lining.

This relationship between temperature and progesterone has not only been known about for decades, but reaffirmed by continuous research since — laying the foundation for the rules by which temperature can be used to work out when ovulation has occurred. The most commonly used is known as the “three over six” rule.  This rule tells us that ovulation has occurred if there is a sustained rise in temperature over 3 consecutive days which is at least 0.3 degrees Celsius (0.54 degrees Fahrenheit) higher than the previous 6 consecutive days.

As with so many aspects of fertility, when and how your body changes can vary greatly from woman to woman, or even cycle to cycle. One of these misconceptions is that all women’s temperatures will ‘dip’ before ovulation followed by a drastic rise. This ‘dip’ is a result of another sex hormone, estrogen. During the later part of the follicular phase, estrogen is released, and this causes a decrease in temperature. However, this doesn’t always occur with predictable timing and the dip is not always the same from woman to woman. That is why OvuSense offers women the ability to draw and adjust their own cover line — a marker that designates pre-ovulation versus post-ovulation.

For some women noting this rise may be particularly important, especially if they have a lot of fluctuation in temperature throughout the cycle. It can mean the difference between getting pregnant and not. Looking at your own data in a ‘big picture’ can allow you to begin to see your own unique CBT patterns and increase your chances of getting pregnant. 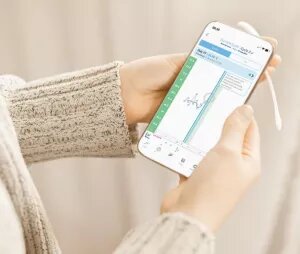 How is Core Body Temperature different?

This is where OvuSense’s real-time monitoring is different from Basal Body Temperature (BBT) fertility monitoring using an oral thermometer, skin-worn sensor, or fertility bracelet. Oral temperature monitoring involves taking a single waking temperature first thing in the morning to try and detect your ‘basal’ (lowest) temperature which will have occurred overnight.  This is tricky and made more inaccurate because oral thermometers only have an accuracy of around 0.1 degrees Celsius so are not easily able to detect the 0.3 degree rise associated with ovulation with accuracy.

Skin-worn sensors and fertility bracelets take many readings instead of one reading, but skin temperature often varies in opposition to what’s happening to temperature on the inside of the body — that’s why you shiver to get warm, and sweat to cool down.[a]

Instead, OvuSense takes overnight Core Body Temperature measurements every five minutes, using a thermistor with a resolution of 0.003 degrees Celsius. The OvuSense algorithm then intelligently filters the data to provide the truest representation of the action of progesterone on the ovaries.

The most important point about oral and skin-worn temperature measurement, though, is that they are unable to predict ovulation using your current cycle data. That means they don’t work for women who have any degree of variability in their ovulation, because the predictions they provide assume that the user ovulates at the same time every month. OvuSense’s unique patented CBT technology enables it to provide prediction of ovulation using current cycle data with a positive predictive value of 96%[b].  It then goes on to confirm the exact date of ovulation with 99% accuracy[c].  Knowing when you’re about to ovulate, and exactly if and when you ovulated is key to improving your chances of successful conception.

[b] The positive predictive value measures how many of the predicted ovulations OvuSense gets right.

[c] The accuracy measures how many positive and absent ovulations OvuSense confirms correctly. The key publication outlining prediction of ovulation was shown at the 2014 ESHRE meeting: Papaioannou S, Delkos D, Pardey J (2014).  The claims for accuracy are based on the data set shown in this paper, originally published at the 2013 ASRM meeting as a quality index: Papaioannou S, Aslam M (2013).