Testimonial: Dimitra Shares Her Story of Overcoming PCOS and Infertility 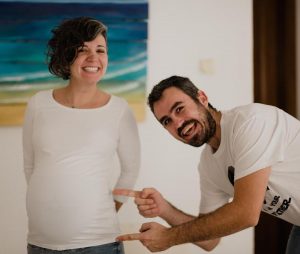 At the age of sixteen, I was diagnosed with Polycystic Ovary Syndrome (PCOS) due to continuously having  irregular cycles, in addition to other issues connected to the syndrome. I was told that I would have problems, and that I would simply have to live with them. I was also told that it would be extremely difficult for me to get pregnant when the time came and I took this news to heart.

For many years, I gave it no further thought since it wasn’t something that concerned me yet and as it seemed I could not do anything about it. Suffice to say, that this was not the case at all - I could do something about it, and I did.

The Start of my Fertility Journey

Fast forward to 2013 when at the age of 29, my husband and I decided to start trying to get pregnant. I wanted to get pregnant more than anything, but I truly did not feel positive that it would ever happen, given the words of my doctors many years ago.

The months went by and my heart sank every time my period came. It seemed that every month my diagnosis was confirmed over and over again. I do not even know how many pregnancy tests I took since my cycle was unstable and incredibly long. So with a forlorn hope, I was just trying my luck. There was one time when I did not do a test, but went straight to the doctor for a checkup instead. I learned I had actually been pregnant, but not anymore. That was our first miscarriage.

I changed my doctor many times and they all had exactly the same point of view and methodology - it is difficult due to PCOS and we will try to get you to ovulate with drugs. The first time my doctor succeeded in helping me ovulate with assistance, I did get pregnant, but it ended up being our second miscarriage. I was distraught. I wondered to myself, how was it not enough that I could not get pregnant and why did it have to end in miscarriage every time I did? The second insemination was a failure, as the doctor was so sure that I ovulated on the 16th day that he did not even check to confirm it.

Another two years passed and we still hadn’t achieved anything, not even to ovulate with drugs, which was the actual protocol. We waited for ovulation to occur between the 14th-18th day. If it doesn't happen then it won't happen at all, they said, so we started to believe that my body just didn’t work. In fact, one doctor was so sure that I would not ovulate later in my cycle that he advised me to stop trying and just give up hope.

I stopped hoping, but not trying.

To everyone's surprise I got pregnant after ovulating late. This happened close to the 40 day mark. Who would have thought that it would happen so late in my cycle! Unfortunately, this also resulted in our third miscarriage.

At this point, I started using ovulation tests, only to find out that they do not work in women with PCOS because they almost always look positive!

It was then I felt utter despair; I cried, I ached, my mind just raced non-stop. Finally after hitting rock bottom, I managed to pull myself out of the abyss. I decided to start looking at what was going on, on my own. What does PCOS mean, how can I help myself, what do other women with the same issue do? I could no longer accept “my fate” and the idea that I had absolutely no control over what was going on in my body.

As I researched, I found an incredible wealth of information to help support my fertility journey.  Tips on diet, exercise, supplements and stories from other women who succeeded getting pregnant with PCOS were all invaluable. Somehow, I came across something called body basal temperature method (BBT) which measures your temperature when you are at rest. Ovulation causes a slight increase in basal body temperature so the idea is that by tracking your temperature each day, you may be able to predict when you are ovulating.

I researched BBT thoroughly and decided to give it a go. I found a simple application on my phone where you enter the data and use a simple thermometer. The truth is that it was quite difficult to recognize all the symptoms (height and texture of the cervix, vaginal fluids and much more). In order to get an accurate temperature read, you need a very good precision thermometer and to be very diligent with your measurements every day. Essentially, you need to become a detective of your body.

With this method I found that very late in my cycle there is in fact a rise in temperature, which is really promising for ovulation. We naturally made our effort that day not believing it could possibly work, but thought that there’s nothing to lose by trying.

After five years of infertility, we were very tired and did not want to waste any more time. The same month that we tried the BBT we also decided to make one last effort and try IVF. That month, we went to three different fertility centers.

The doctors’ prognosis was everything from unexplicable infertility, to challenges resulting from my PCOS. So, we decided to try IVF and waited for the first day of my period to do the necessary tests and start my treatment. Everything was ready, we were ready, and 14 days later on the first day of my period, we did the last blood tests before administering the drugs. To everyone's surprise - I was pregnant! Reading the temperature along with all the readings, signs and observing my body, I found the right day and that was ultimately all I needed for so many years. Timing!

Despite the stress of my third miscarriage, after nine months, our little miracle who is now two years old was born.

This past summer, we decided to start trying for baby number two. With renewed faith that I could in fact get pregnant, and a lot easier than originally anticipated, we went in search of a device that provided more accurate data. It was then I came across OvuSense. It promised precise calculation of my temperature through its sensors and of the data that is input in the app. It also promised to show my fertile days in real time. With PCOS  there may be several peaks in your temperature, it’s particularly hard to get the right day of ovulation without the correct analysis and thermometer.

That month I spent a lot of time reading up on OvuSense’s website, I asked even more on their wonderful Facebook page, and I got immediate and informed opinions from women going through the same as me, but also from the admins.

I observed my temperature every day until the 40th day when a sudden spike confirmed that I was ovulating and it showed my fertile days. The support I received those 14 days was something extraordinary. Every day I hoped I wouldn’t see my temperature drop, something that would mean that my period was round the corner.

The days went by and my temperature didn’t drop. 14 days after ovulating I took the test and it was positive! I knew it would be because I could see it happening every day through the chart. That unfortunately ended up being our fourth miscarriage, but now I was more sure than ever that I could do it again. I now believed in myself and in my body and I had the evidence to prove it! It was no longer something random. It was something that really happened on the right day at the right time. I knew now without any shadow of a doubt that it wasn’t my body to blame, but bad timing. This is going to sound strange but even during my miscarriage, I felt empowered by this newfound knowledge.

Renewing Faith in Myself & My Body 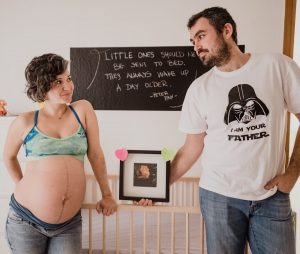 Five months later, I am 18 weeks pregnant! After so many years, so many tears and so much effort, I realized that everything is a matter of the right timing. I cannot put into words how grateful I am to the entire OvuSense team for all their amazing work. Through my experience, I have not only managed to become a mum, but I have renewed my faith in not only myself, but my body too. Whoever has experienced infertility is well aware of the cost to our lives and mental health.

For someone who at the age of 16 was utterly convinced that she would get pregnant with great difficulty, going through so many hurdles, and managing not only once but three times to get pregnant from the first month solely with the correct knowledge and assistance, is nothing short of a miracle. It’s not always easy, but sometimes, it’s not effort that’s needed, but just the right way - and OvuSense has definitely found it!

OvuFirst™
When you are just starting out. Fits under your arm or on your wrist while you sleep

OvuSense OvuCore™
The ultimate in accuracy. Fits comfortably in your vagina while you sleep

OvuSense® Pro
If you are talking to a OB/GYN or specialist about your fertility, or plan to