What Is a Fertile Window, and How Do You Find Yours?

When you’re trying to conceive, you need to make sure you’re trying at the right time, under the right circumstances. As you may or may not know, there are certain days of your cycle when it is easier to get pregnant. 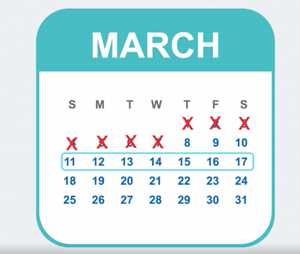 Known as the ‘fertile window’, this is a small number of days that revolve around your ovulation date when it is easier to conceive. But what really is a fertile window, and how do you find yours? Read on for more!

What is a fertile window?

Your fertile window refers to the most fertile days in your menstrual cycle which give you the highest chance of conceiving. A ‘normal’ menstrual cycle is 28 days in length, day 1 being the first day of your period. However, in reality, very few women have a regular 28-day cycle. A cycle may vary from 25-35 days in length, however, for women suffering from hormonal conditions such as PCOS, cycles can be much longer.

When is a fertile window?

Your fertile window is governed by two important factors: how long an egg remains fertile once it’s ejected from your ovaries, and how long sperm can survive in your body. It is typically in the middle of your cycle, spanning from five days before you ovulate to the day after, as sperm can live in the reproductive tract for up to five days. Once your egg is released, it typically only has 24 hours in which it can be fertilized, so your fertile window is typically a span of 6-8 days calculated around the day you ovulate.

How do you find yours?

Everyone is different, and that means that there’s no universal schedule telling you when your fertile window is – you have to understand your own body to learn when you ovulate. To calculate your fertile window, you need to determine what day you ovulate and the length of your menstrual cycle. This can be done through ovulation test strips, temping, monitoring your cervical mucus, or using ovulation monitors like OvuSense, among other methods.

Once you know when you expect to ovulate, it is recommended to have intercourse regularly throughout your fertile window to increase your chances of conceiving. However, if you have irregular cycles or aren’t sure when you ovulate, it can be incredibly difficult to predict this window in advance.

How OvuSense Can Help

Any kind of irregularity in your cycle makes it all the more important to take advantage of those times when you do ovulate. This means careful tracking of your cycle to spot the key signs that give you a clue when you’re in your fertile window. Using your unique temperature information, OvuSense identifies an 8-day fertile window based on when you are predicted to ovulate. This window is the eight days when you are most likely to be able to conceive, from five days before ovulation until two days after ovulation to include an additional buffer.

OvuSense uses a vaginal sensor to monitor your true fluctuations of progesterone throughout your cycle, unlike Basal Body Temperature monitoring devices which take oral temperature measurements to predict when ovulation occurs. The advantages of using OvuSense's method include a greater level of accuracy when measuring temperature, as well as the ability to use up-to-date data to predict your current month's cycle, as opposed to using data from the previous month. This allows you to get an accurate prediction of ovulation date even if your cycles are irregular from one month to the next!

Click here to learn more about how OvuSense can help predict ovulation in advance, and confirm if ovulation took place with 99% accuracy.